While I was growing up, there was a phrase that I kept hearing my parents say that I really truly never quite understood. They would look around and say, “Well, God really does have a sense of humor, doesn’t he?” If something happened that seemed ironic or life brought on unexpected events, this phrase would be tossed out and all the grown ups would chuckle and shake their heads in what seemed like agreement. But to me, it never really made sense. At that point in my life, my understanding of God was pretty standard - he was sovereign and just, slow to anger and loved me despite my flawed humanity. In my head, I couldn’t picture God cracking a knee-slappin’ joke or sounding off with a random, “Knock - knock!”

Yet finally, almost two decades later, something clicked. If God really is all those things - sovereign, just, and full of everlasting love - (and he is, and more!) who I am I to say that he isn’t the king of humor as well? After all, we’re told multiple times in the Bible, starting even in Genesis, that God created us in HIS image. Genesis 5:1 says, “...When God created human beings, he made them to be like him.” As in, who we are and the traits we have such as our grace, love, and kindness, all are mirrored from God himself! Therefore, if my own dad delivers a pun so “punny” it’s worthy of the biggest face-palm, that’s only because he was created as a reflection of God’s own self.

The more that I look at my life and my surroundings, I can see God’s sense of humor in more and more ways. Maybe you’ve experienced a day like the one I’m about to describe to you:

It’s a Friday. It’s been the longest. week. ever. I was tired, physically and emotionally, but found relief in the fact that Friday meant the weekend was coming. I told myself, “All I have to do is get through the day! Then I can finally crash on my couch, hide under a fuzzy blanket, drink my hot chocolate with extra chocolate, and snuggle with my dog as the page turns to the weekend.”

Then my day proceeded to go from “let’s just get through it” to “how can this get worse?” My jeans got caught on a drawer and ripped...it wasn’t even 8:30am yet. Then a project I had been working on all week hit a snag and the materials were completely messed up in a way that was unfixable in the time that I had. Great. Then, an activity I was leading became more chaotic and challenging than I had ever planned for - causing us to completely run out of supplies before it was even halfway done. Great. Then I got a call that my 2.5 year old son threw up in his classroom - for the first time EVER. Great. Then he wouldn’t go home with my husband, he needed me. It was a constant blast of “oof” that I couldn’t escape.

But get this - this is where I saw God’s humor firsthand. I was teaching later that day to some students. I was coming in as a speaker and got to choose my own topic. I had picked it weeks before and had already prepared for it. What was the subject? It was “How to Find Joy in Our Trials.” As I prepared to speak, I had to shake my head and laugh. Though God’s sense of humor looks a little different than ours (as in, God never has and never will use humor at our expense - we will never be God’s punch line) He used his perfect humorous irony to show me He loves me and always has a plan for me and my life.

So while we may never get to see God do a stand-up comedy set, we can have the confidence that our sense of humor comes from our creation by God as a reflection of himself. 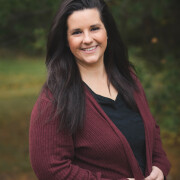