When I was a kid, we took a family vacation and headed to South Dakota to see Mount Rushmore. While we were out there, we did some touristy things, but mostly we stopped at museums and historical sites and stuff like that. I realize now that almost every one of my family vacations as a kid were educational. Mount Rushmore, Gettysburg, even when we went to Maine; educational. I mean it makes sense, we were homeschooled, my mom was a teacher, I get it. But I can remember when I had the realization that everything we did was educational and it was like having the rug pulled out from under me. If you’re feeling any sort of outrage like I did, just wait, it gets worse. Every game I had as a kid was educational. While some of my friends grew up playing things like “Shark Attack” and “Dead End Drive”, we had card games like “Great Explorers of the World”. Even “Candy Land”, one of the great childhood games of all time, is designed to teach you colors. Boo. Well, now that I’ve tarnished every good childhood memory you have, let’s get back to my vacation.

So, we went to see Mount Rushmore, if you haven’t been out there at least once, I’d recommend it. It’s a cool piece of our history and represents a ton of work. But actually, two of the things I remember most from this trip weren’t related to Mount Rushmore at all. While we were out in that area, we took a short trip over to a place called Devil’s Tower in Wyoming. Devil’s Tower is this giant, naturally formed, big, cracked, stone butte rising up out of the land. It stands 867 feet tall and can be seen from like 12 miles away or something like that. I can remember as a kid, sitting in the car and catching my first glimpse of Devil’s Tower and, to be honest, I was not impressed. But as we got closer and closer it started to dawn on me how big this thing actually was. And then, when we got as close as we were able, it seemed so tall, and so immense, that I had this feeling that I was incredibly tiny.

The second thing I remember vividly from this trip is taking the ferry across Lake Michigan on the way home. Now, admittedly, I spend most of my time downstairs in the arcade. But, when I ran out quarters and the only movie showing was Willy Wonka and the Chocolate Factory (the 1971 one), which I found terrifying, I went up on deck. I can remember this moment of standing on the ferry and being able to look all around. And, in every direction I looked, all I saw was water. I couldn’t see any land, just the beautiful blue waters of Lake Michigan. It was a very cool experience, but also very humbling. Again, here I was, this tiny little speck of a person on the surface of this giant lake.

So, why am I telling you all of this? We’re actually kicking off a new devotional series today called “God is ________.” And over the summer, you’ll get to hear from a number of different people, what word or phrase they would fill that blank in with. It’s going to be a great series and I think you’re going to hear a lot of amazing people pointing out what an amazing God we have. But as I was thinking about what I would write on to kick us off, the idea that “God is immense” seemed to be perfect. You see, there are a lot of words that I could use to describe God; faithful, loving, holy, powerful, on the move, and all of these things are true. But no individual word or phrase could describe God. Each of those characteristics and words actually make up just a piece of who God is. In all actuality, God is bigger than we could ever know or understand. He’s so big, so huge, so immense, that actually every good word we could think of describes God and simultaneously doesn’t even begin to describe God. He’s so big He holds the world, the galaxy, the universe, and even time in His hands. He is omnipotent, omniscient, and omnipresent. Those are fancy words that mean all powerful, all knowing, and everywhere at once. He is unknowable, unexplainable, and indefinable. But the cool thing is that, at the same time He is known. He is relatable. He is reachable.

You see, God, in His immensity, created each of us. He spoke life into the world and spoke life into you and I. And, because He’s our creator, He desires true and real relationship with us. When we begin to know Him, the Bible actually says that He reveals pieces of Himself to us so that we can better understand and know Him. Is God big? Yeah, He’s huge. But in His bigness, in His immensity, and in His majesty, He is also seeking a relationship with each one of us and knows us each by name. Are there times we should marvel and be in awe of God’s immensity? Absolutely, that’s actually a part of worship. But the cool thing is, when we feel small, scared, or insignificant, we know that God, who is bigger and better than anything we could possibly imagine, is in our corner. God is fighting our battles for us, God loves us, and He knows each of us by name. 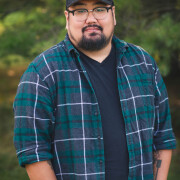